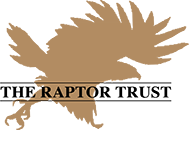 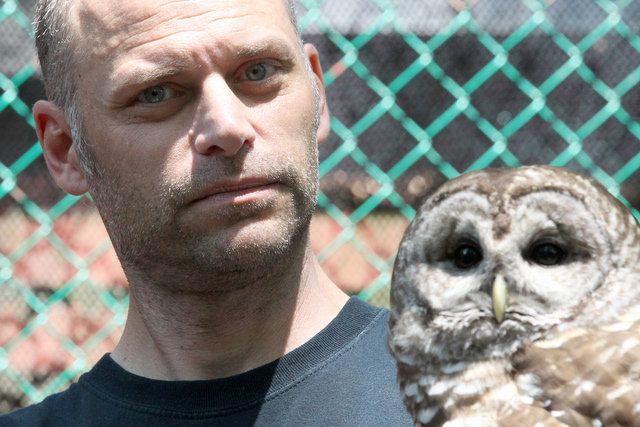 By Mark DiIonno- June 26, 2014 (NJ.com) It is a summer day at the Raptor Trust, and the convoy of SUVs begins. From each emerges a mother and child, or children, holding a box. In the box is an injured bird, or abandoned baby birds. “If we had a pair of shoes for every shoe box that came in, we’d … 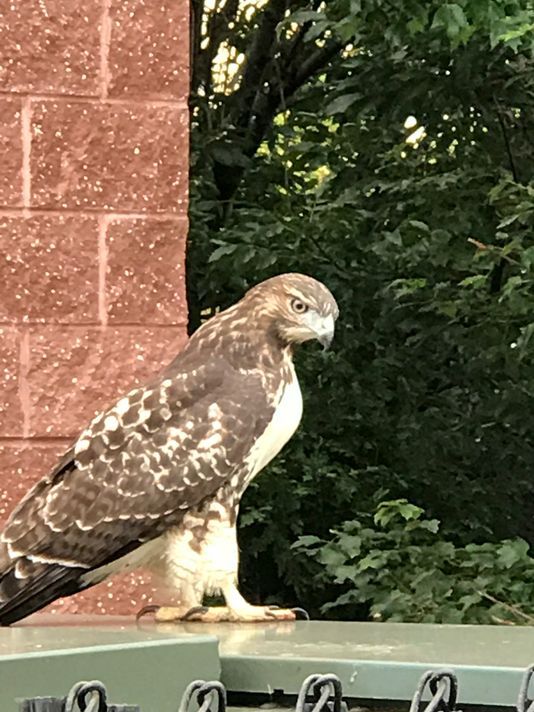 CARLSTADT – After he was found emaciated and on a sidewalk near a bagel shop on Aug. 3, an injured hawk that Carlstadt neighbors named “Koko” is at The Raptor Trust rehabilitation facility.

The juvenile red-tailed male hawk is part of a family of four that keep Garden Street rodent free. Resident Bruce Young said he learned about the hawk, also known as #17-2967 on the RaptorTrust.org site, when he got a call from Carlstadt Bagels & Deli at 326 Garden St., where he is a regular. The young raptor was named after the Korean animation studio that did the “Dark Knight.”

“[Koko’s] father was on the fence and mom was hunting. Koko was on a sidewalk and standing on one leg,” said Young.

How Koko got injured no one knows, but his foot was clearly in need of attention.

Young, the bagel shop owner and a police lieutenant carefully coaxed Koko into a container for transportation to his first stop on a journey. The trio used a flat piece of cardboard to scoop Koko into a cardboard box.

“I took a peek inside, and he seemed okay. He wasn’t flapping around. He was cooperative with police, didn’t resist our help,” said Lt. Denise Kimak.

The next stop was the Franklin Lakes Animal Hospital, which takes hawks in to provide a stable, warm and comfortable environmental before volunteers make transports 45 minutes away at The Raptor Trust in Millington.

“We’re like a halfway house for these raptors,” said wildlife coordinator Donna Pontrelli of the Franklin Lakes Animal Hospital. “Koko was down and out. He was emaciated, probably wasn’t able to hunt for food.”

Hawks get stressed easily, so Pontrelli said Koko was not immediately placed on an x-ray table. Instead, he was given warmth, dimmed lights, quiet comfort and a tall bowl of water.

“Then he stood upright in that beautiful position, just chilling. But he was holding one leg up a little, curling it in, not really extending the feet, which are like weapons,” Pontrelli said.

At The Raptor Trust, Koko received vitamin shots and was being prepared for an X-ray. He weighs 665 grams, but should be around 800.

“He’s thin and dehydrated, holds his left foot like a ball, so there’s some impact or injury to that side,” said Kristi Ward, senior rehab technician. “He may just need a ‘pad foot’ for a while to keep the foot open.”

The facility sometimes gets up to 30 raptors in per week, she said. The center has an over 50 percent release rate.

“A lot of times the parents stopped feeding them, after weaning them off so the fledglings have to eventually fend for themselves,” said Ward. “Sometimes they get hit by cars or they get injured in some other way. When they come to us, we provide the best care we can. Some succumb to their injuries or they’re able to be successfully released but we can’t guarantee it.”

Description: A medium-sized bird of prey known as a raptor. They have long, broad wings and short, wide tails with reddish brown color. Juveniles lack the red tail. Females are about 25% heavier than males.
Call: A raspy, scraping, screamed “kree-eee-ar.” The raspy cry of the Red-tailed Hawk is used in movies to represent any eagle or hawk anywhere in the world.
Habitat: One of the most widely distributed hawks in the Americas. It breeds from central Alaska to Florida, the West Indies, and Central America. It occupies a wide range of habitats and altitudes, including deserts, grasslands, forests, agricultural fields and urban areas.
Diet: Small mammals, including rodents and rabbits. They also eat birds, reptiles, fish and insects.
Nesting: Build nests in tall trees, often the tallest tree in a cluster or on cliff ledges. Towers, nest platforms, and buildings are also used for nesting. The nest is a collection of sticks lined with bark and other material.
Babies: Both adults help incubate the 2 to 3 eggs for 28 to 32 days. The female stays on the nest and broods the young for the first 30 to 35 days after they hatch. The male brings food to the female who to feed the young. After 42 to 46 days, the young leave the nest, but they can’t fly for another 2 to 3 weeks.
Behavior: Red-tailed Hawks are well adapted for soaring and spend long periods riding thermals, searching for prey. It is frequently seen sitting on utility poles. 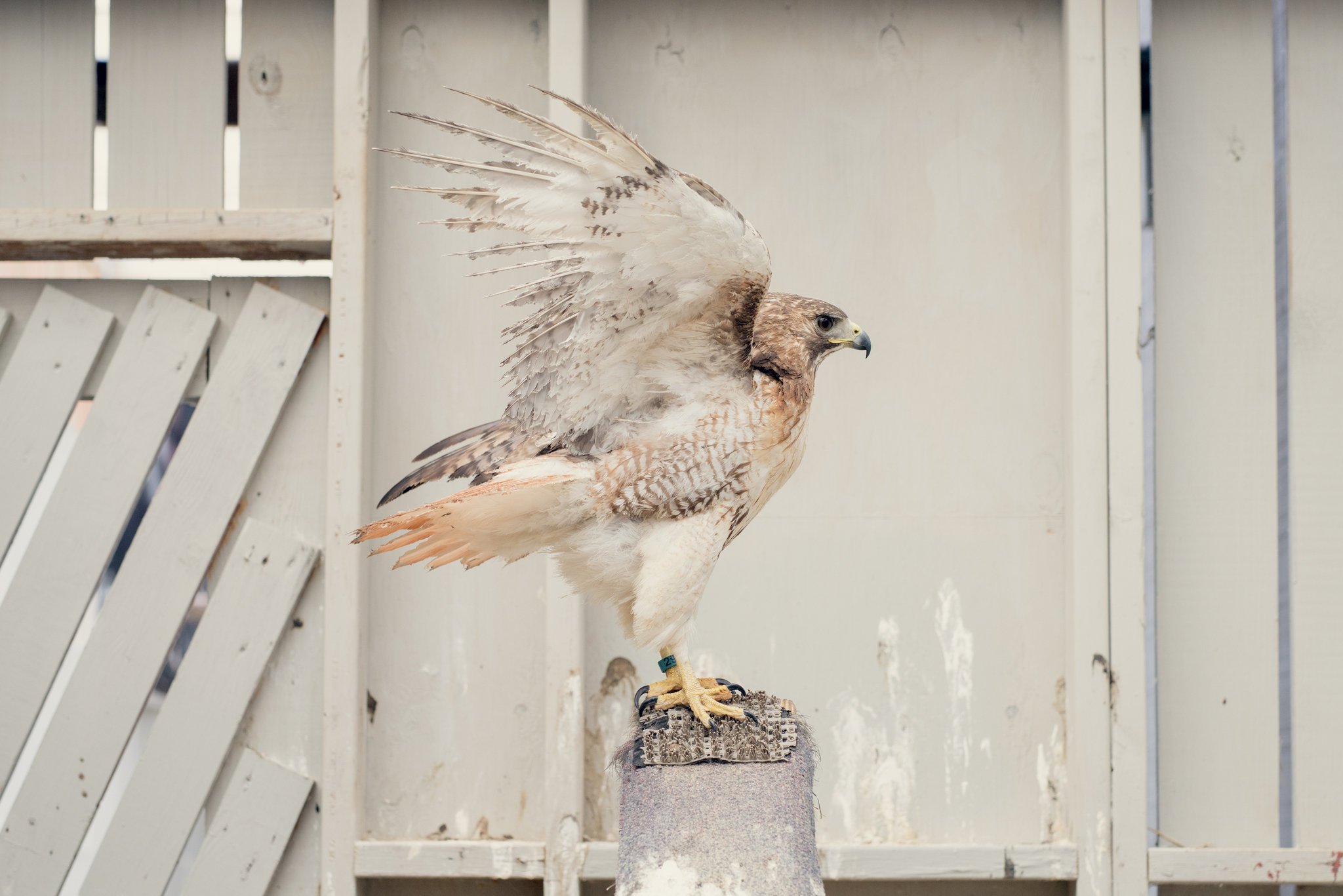 By Rick Rojas- April 26, 2017 (New York Times) NORTH ARLINGTON, N.J. — From some vantages along the rolling meadow, the gleaming Manhattan skyline can be seen clearly in the distance, rising above the tall grass, beyond the water, roadways and fixtures of industry that dot the New Jersey horizon. But on a bright and tranquil Sunday morning, all of … 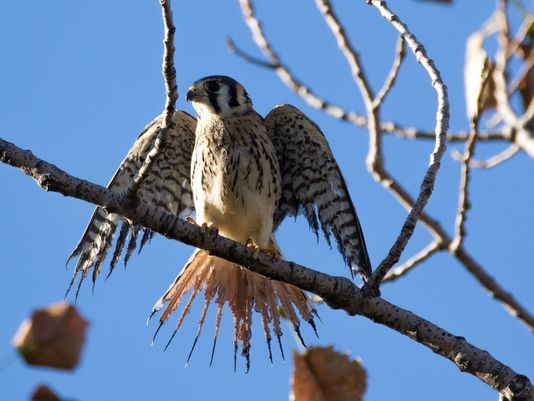 LYNDHURST, N.J. — Soon an invisible flame should be killing or singeing fewer birds as they fly over the Meadowlands, a wetlands area in northeastern New Jersey.

Officials have started to install a giant cage-like structure about seven stories tall around a flame at the closed Kingsland Landfill. The cage is expected to prevent raptors and other birds from accidentally flying through and getting singed or incinerated.

“It feels good that they’ve listened and are finally doing something about it,” said President Don Torino of the Bergen County Audubon Society, who has complained for years about the problem to the New Jersey Sports and Exposition Authority that oversees the landfill here. “There were no other methods out there that they could copy.”

The agency had asked for advice from the federal Fish and Wildlife Service and other experts. Most were stumped, but Public Service Electric & Gas workers recently came up with the design for a giant cage around the flame that burns off methane vented from the landfill, where waste decomposes underground.

“It certainly will help with the bigger raptors,” Torino said of the structure. “Small birds might still be a concern. But it’s certainly better than where we were.”

“If this were a simple problem, something would have been done about it a long time ago.” Don Torino, Bergen County Audubon Society

The sports authority recently paid the utility $65,000 to install eight telephone poles, each 75 feet high, to create the frame for the cage.

“We are performing the work for NJSEA at cost,” utility spokeswoman Brooke Houston said.

Next will come bids for a chain-link fence to be installed from the top of the poles about 20 feet down. The cage won’t have a roof because officials didn’t want to encourage birds to land above the flame, said spokesman Brian Aberback of the New Jersey Sports and Exposition Authority.

“The authority’s hard work has helped contribute to the comeback of birds and other wildlife in the Meadowlands region, and their health and safety is of paramount importance to us,” said Wayne Hasenbalg, the sports authority’s president.

Red-tailed hawks, ospreys and kestrels — a small hawk with declining populations that is considered threatened in New Jersey — were among the birds found with singed wing or tail feathers. Some were taken about 30 miles away to the Raptor Trust in Millington, N.J., for rehabilitation, but most birds need a year or more to regrow feathers.

Birds with injured tail and wing feathers have a tough time hunting for prey and are not likely to survive migration as winter approaches, according to Chris Soucy, director of the Raptor Trust.

Despite seeking out consultants and other experts to address the issue, the sports authority was stymied in part because there isn’t a national standard for how to protect birds from being injured or killed in such flames.

Many of the methods already being used across the USA to reduce the problem call for the stacks to have intermittent flames, not flames that burn constantly, as in the Meadowlands. Consultants had suggested everything from mechanical modifications of the stack to an additive that makes the heat visible to birds.

The flame that burns off methane 24 hours a day at the closed Kingsland Landfill in Lyndhurst, N.J., is barely visible and sometimes invisible. Birds, including federally protected raptors, fly through it and get singed or killed. (Photo: Anne-Marie Caruso, The (Bergen County, N.J.) Record)

“If this were a simple problem, something would have been done about it a long time ago,” Torino said.

Ultimately, the sports authority set out to design a structure that birds would want to avoid, such as a building, Aberback said. Even with the structure partially completed, officials have not seen birds approach it.

“The deterrent will appear to birds as a solid building, which will discourage birds of all sizes from flying near it,” he said.

Methane flares at all landfills pose dangers to birds, experts said. Raptors are protected under the federal Migratory Bird Treaty Act, and landfill operators could be liable for up to $15,000 for each injured bird.

Sports authority officials have said they ultimately would like to contract with a company to capture the Kingsland Landfill methane for industrial use, eliminating the need for the flare.

This past fall the sports authority cut down trees around the flame to make it less attractive to birds that like to perch while searching for food.

The problem is worse during migration season when smaller birds are attracted to the grassy habitat, Torino said.

Unlike larger hawks and other raptors, many of these smaller birds do recover from their injuries. Torino said he has seen small savannah sparrows, a threatened species in New Jersey, get burned and then drop helplessly into the vegetation.

The project should be done in September, Aberback said. The final cost won’t be known until then.

“I just hope they can finish the project before the fall bird migration starts, which isn’t that far away,” Torino said. 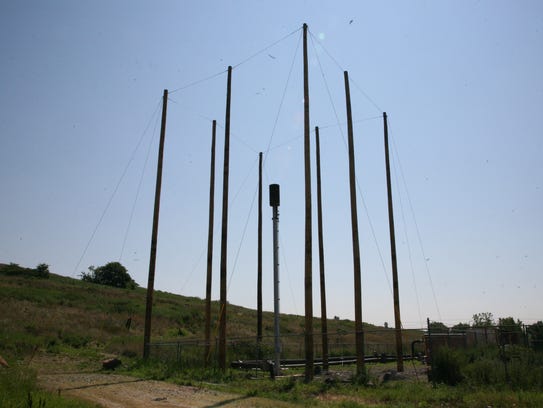 Officials are building a cage about 75 feet tall around the methane flame at the Kingsland Landfill in the Meadowlands to prevent birds from flying through the flame and getting singed or killed. (Photo: James M. O’Neill/NorthJersey.com) 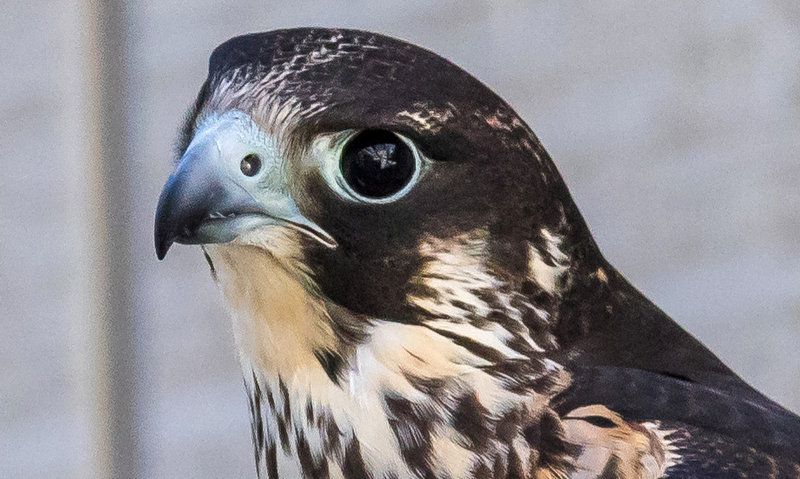 By Sallie Graziano- February 26, 2016 (NJ.com) UNION TWP. — It took just seconds for a peregrine falcon to disappear over Spruce Run Reservoir following his release Friday morning. The bird, a second-year adult male, was rehabilitated by the Millington-based Raptor Trust after being found severely injured in the yard of a Roxbury resident. Joseph Bourlier alerted the raptor trust …